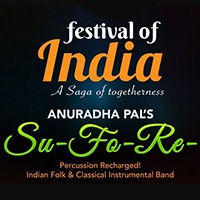 I just got back from Qatar after a memorable tour where I performed three concerts with my new Folk-Classical, instrumental-vocal-percussion band called, Su-Fo-Re-; at the highly prestigious Festival of India, organised by the Embassy of India in Qatar in collaboration with the Qatar Government, and sponsored by the Ministry of Culture, Government of India.

I am very happy to share with you some photographs and a video from our performances (2 at the pristine Katara Cultural Village and 1 at the India Cultural Centre in Doha) along with some very special words of appreciation from the Honourable Ambassador of India to Qatar, Mr. P. Kumaran and his wife Mrs. Ritu Kumaran, and the audiences.

Anuradha Pal’s Su-Fo-Re- group presented a unique & exhilarating confluence of Rajasthani Folk, Hindustani & Carnatic music; recharged with dazzling Indian and World percussion; to thunderous applause and standing ovations from the audiences at each of the venues. For the first time ever, Carnatic Krithis fused with Rajasthani folk songs and Hindustani Bandishes; and World Percussion; to create a distinctive musical experience.

The band also performed a very special tribute to Mother India, via a musical journey through various states and their distinct folk music and percussion styles, travelling from Karnataka to Mumbai to West Bengal to Gujarat to Punjab to Rajasthan to Kashmir, finally reaching a climax with the National Song ‘Vande Mataram‘.

Message of appreciation from the Honourable Ambassador of India to Qatar 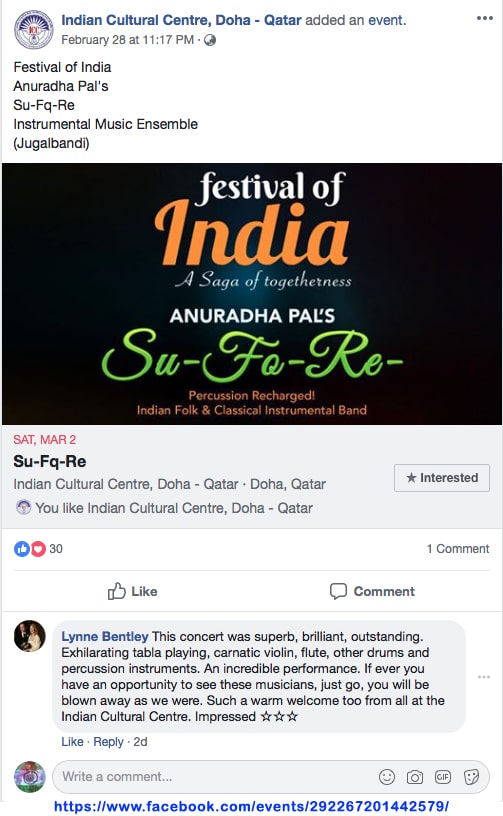